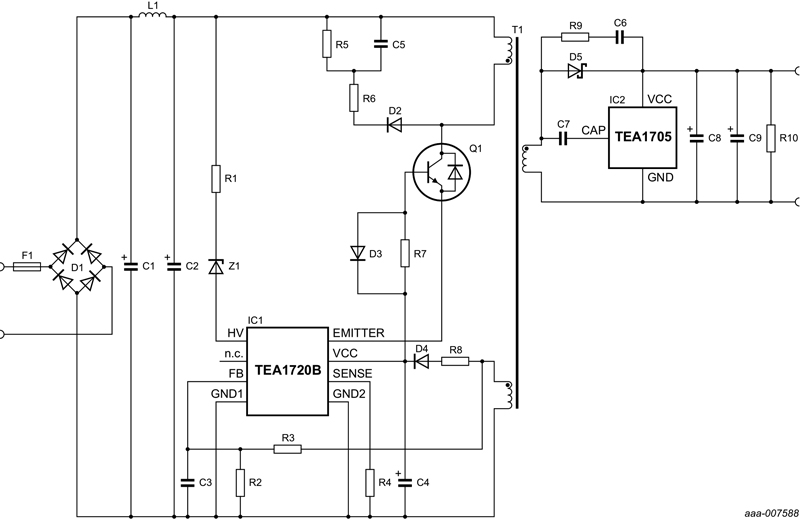 Figure 1. Theoretical (left) and Actual (right) models of a capacitor.

Due to the constant evolution of consumer electronics, efficient power conversion is critical for reliable performance, and the filtering of output ripple is a critical factor in supplying consistent power to the load. This article provides a breakdown of filter capacitor technologies and their respective performance characteristics regarding power conversion efficiency in consumer electronics. Continual pressure to miniaturize a system or increase its functionality means that the impact of parasitics increases in the device. In the case of an SMPS system in particular, increasing the switching frequency to improve efficiency can often result in increasing parasitic effects, each of which will then result in higher ripple voltage at frequencies in the KHz to MHz range. This ripple voltage can be greatly reduced with the correct selection of filtering capacitors in the system. Control of these parasitic effects is important to minimize heating for higher power/cc designs. There are several characteristics of filter capacitors to consider when seeking to maximize the efficiency of power conversion systems. Ultimately, application-specific constraints will determine the ratings needed for a given system and choosing the correct technology will have a major impact on design. Certain construction, materials, and electrical properties are better suited to some applications than others, and making the appropriate selections will result in a consistent supply of power to the electronic device for its given operating conditions. The principle drivers in selecting the correct filter capacitor are the internal parasitics associated with their materials and construction. During the selection process, consider the effects of non-ideal parasitics for a given capacitor technology. Limiting these parasitics is important to achieve power quality optimization. The three major parasitic influences on output voltage quality are Equivalent Series Resistance (ESR), Equivalent Series Inductance (ESL), and Insulation Resistance (IR). In the actual model of a capacitor (Figure 1), ESR and ESL are the resistive and inductive properties of the metals incorporated into the capacitor's construction (electrodes and leads), and the IR is the resistance of the dielectric material used in the capacitor. Choosing the correct materials and proper construction techniques has a direct impact on the performance of the capacitors as ripple filters. 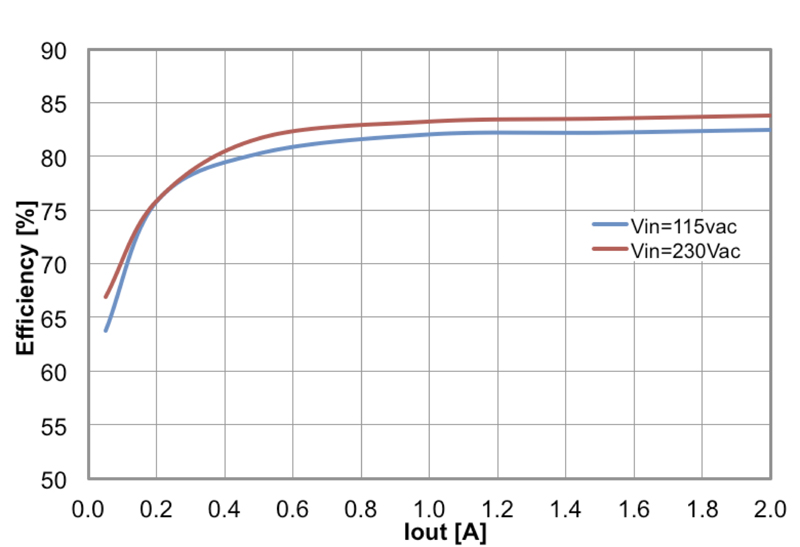 Typically, output filter capacitors require extremely low ESR. Low ESR values, in accordance with specific capacitance requirements, increase power quality significantly by reducing ripple voltage. A well-designed power conversion device can approach maximum efficiency (Figure 2). Keeping that in mind, differing filter capacitor technologies each have their own set of advantages and disadvantages in regard to power conversion performance. Four common capacitor technology options are stacked ceramics, tantalum, film, and aluminum electrolytics. Stacked ceramic MLCC capacitors are non-polar devices. Composed of many alternating thin ceramic layers with staggered metal electrodes, their multiple layers are stacked to increase capacitance voltage (CV) density or CV/cc per unit volume. New configurations of stacked capacitors, such as capacitors with electrodes perpendicular to the PCB traces drive, can reduce the already low ESR and ESL figures of stacked capacitors. Plastic film, another non-polar material, can also be used as a dielectric in output filter capacitors. The term "film capacitor" defines these components, which are made of an insulating polymer film and a metal foil electrode, typically using polyester or polypropylene materials as the dielectric. Tantalum capacitors may also be considered in these applications. Tantalum metal forms the anode, while its oxide layer makes up the dielectric. Standard tantalum technology uses manganese dioxide as the counter-electrode (cathode), as this material features self-healing properties for long life. Similarly, a polymer material can be used as the counter-electrode to achieve lower ESR values. Aluminum electrolytic capacitors are widely used as filter capacitors in consumer applications. Constructed of an aluminum oxide dielectric, thin aluminum plates, and an ionic conducting liquid, aluminum electrolytics commonly suffer from an "end of life" wear-out mechanism due to their materials and construction. Output filtering performance differs with each of these technologies and has a direct impact on the output voltage quality (e.g. ripple). The factors that dictate the performance of these capacitors are the previously mentioned parasitics associated with the chosen component. 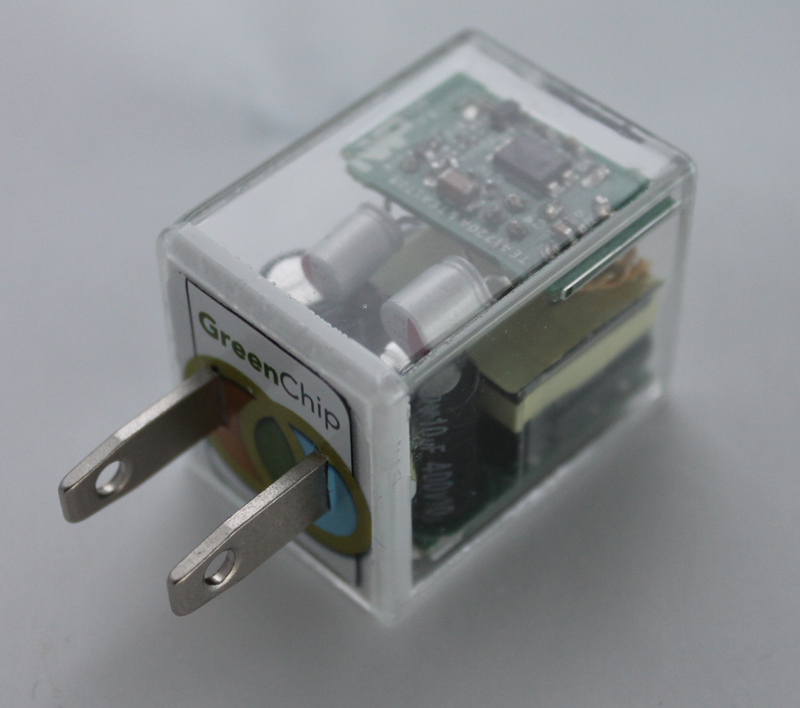 The ESR comparison in Figure 3 demonstrates the variance in parasitic parameters for each capacitor technology over the typical operating frequency range for power conversion in consumer electronics (1KHz -10MHz). Based on the parasitic characteristics of these technologies, it can be determined that stacked MLCC output filter capacitors exhibit significantly lower ESR values, providing more efficient filtering properties than the opposing technologies. However, in consumer electronics, board space and component costs are two additional factors that dictate device design and component selection. Since PCB real estate is at a premium in modern electronics, volumetric efficiency is critical when selecting the components utilized in the power conversion segment of the PCB. The highest volumetric efficiency for capacitance/voltage is realized by tantalum capacitor technology. Using microchip construction methods, miniaturization of high CV components is one of the major benefits of tantalum capacitors. Ceramic chips offer footprint reduction solutions as well, and due to the significantly lower parasitics associated with the multilayer approach, smaller value MLCCs can replace larger electrical value electrolytics and tantalums. A ratio of 1:10 (ceramic to electrolytic) value is reasonable. Consequently, MLCCs offer some of the smallest-sized output capacitor options in some applications. Relative to tantalum chips, ceramic capacitors offer ESR values an order of magnitude lower for frequencies in the 10KHz range and greater. Subsequently, this leads to greater filtering efficiency in the given application in spite of the lower CV density. For aluminum electrolytic components, parasitics are much more evident due to their rolled-foil and leaded construction approach. Their ESL and ESR values are orders of magnitude higher than those of tantalum or ceramics; thus, higher capacitance values are required to filter the voltage ripple during power conversion. In some applications where a small tantalum or ceramic could be utilized, it would require a much larger electrolytic can to be placed on the board. Cost also plays a major role in filter capacitor selection, especially when designing high volume consumer electronics. In commercial electronics, the choice between technologies remains driven by volumetric efficiency (CV/cc), surface mount compatibility, and application ripple requirements (which, in turn, depend on the ESR and ESL ratings of the device). For power filtering, there is often an application overlap between tantalum and class II ceramic (X7R & X5R). As these are often used in high-reliability versions of products with enhanced volumetric efficiency and minimized parasitics, their cost is typically higher. In consumer electronics, long-term reliability (e.g. 20+ years) is not as significant a factor as in military, medical, or aerospace applications. In fact, in consumer circuits, electrolytics have previously been largely unchallenged as output filters, primarily due to their low cost. However, advances in stacked MLCC and tantalum capacitor manufacturing have greatly increased their use in a wide range of emerging consumer applications. In conclusion, electronic engineers have several options when designing filter capacitors for power conversion circuits into consumer electronics and should be sure to consider the application with regards to each devices' size, parasitic characteristics, dielectric technology, and component construction. AVX References 1. DC Wave Filtering Image: Storr, Wayne. DNA Technology, "Full Wave Rectifier - The Smoothing Capacitor." Last modified 2011. Accessed March 6, 2013. www.dnatechindia.com/Tutorial/Basic-Electronics/Full-Wave-Rectifier.html.