90W with reliable and easy-to-use standard

Power over Ethernet, or PoE, is an increasingly popular way to deliver both power and data over existing Ethernet cable, thus freeing applications from the constraint of AC-power proximity. As the number PoE solutions has grown, so has the applications' appetite for power. A new proprietary standard, LTPoE++™, satisfies this hunger by extending the PoE and PoE+ specifications to 90W of PD delivered power. LTPoE++ also dramatically reduces engineering complexity in power sourcing equipment (PSEs) and powered devices (PDs) when compared to other power-expansion solutions. Plug-and-play simplicity and safe, robust power delivery are hallmarks of LTPoE++. The capabilities of this standard expand the field of Ethernet-powered applications by several orders of magnitude, enabling entirely new classes of PDs, such as power-hungry picocells, base stations or heaters for pan-tilt-zoom cameras. The IEEE standard defines PoE terminology, as shown in Figure 1. A device that provides power to the network is known as a PSE, or power sourcing equipment, while a device that draws power from the network is known as a PD, or powered device. PSEs come in two types: endpoints (typically network switches or routers), which send both data and power, and midspans, which inject power but pass data through. Midspans are typically used to add PoE capability to existing non-PoE networks. Typical PD applications are IP phones, wireless access points, security cameras, cellular femtocells, picocells and base stations. The IEEE PoE+ specification specifies backward compatibility with 802.3af PSEs and PDs. The PoE+ specification defines Type 1 PSEs and PDs to include PSEs and PDs delivering up 13W. Type 2 PSEs and PDs deliver up to 25.5W. LTPoE++ Evolution The IEEE PoE+ 25.5W specification had not yet been finalized when it became clear that there was a significant and increasing need for more than 25.5W of delivered power. In response to this need, the LTPoE++ specification reliably allocates up to 90W of delivered power to an LTPoE++ PD. The LTPoE++ specification provides reliable detection and classification extensions to existing IEEE PoE protocols. LTPoE++ is backward compatible and interoperable with existing Type 1 and Type 2 PDs. Unlike other proprietary power-extending solutions, Linear's LTPoE++ provides mutual identification between the PSE and PD. LTPoE++ PSEs can differentiate between an LTPoE++ PD and all other types of IEEE compliant PDs, allowing LTPoE++ PSEs to remain compliant and interoperable with existing equipment. LTPoE++ PSEs and PDs seamlessly interoperate with IEEE 802.3at Type 1 and Type 2 devices. Type 1 PSEs generally encompass 802.3af functionality at and below 13W. Type 2 PSEs extend traditional PoE to 25.5W. Type 1 PSEs will power all Type 1, Type 2 and LTPoE++ PDs with up to 13W. Type 2 PSEs will power Type 1 PDs with up to 13W and provide 25.5W to Type 2 and LTPoE++ PDs. LTPoE++ PDs can power up with limited functionality even when attached to traditional Type 1 and 2 PSEs. LTPoE++ PSEs interoperate with Type 1 and Type 2 PDs. LTPoE++ PDs are powered to the designed limit of the LTPoE++ PSE. When an LTPoE++ PD is identified, the PD will be powered up if the PSE power rating meets or exceeds the requested PD power. For example, a 45W LTPoE++ PSE can power both 35W and 45W PDs. 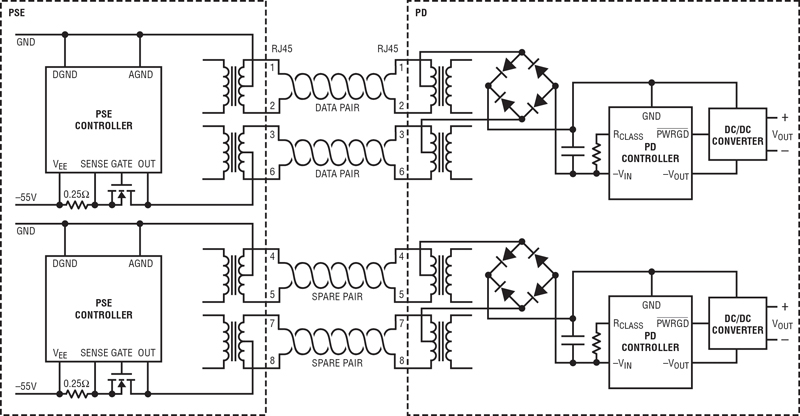 LTPoE++ Advantages Standard PoE PSEs use two of the four available Ethernet cable pairs for power. Some power-extending topologies use two PSEs and two PDs over one cable to deliver 2 × 25.5W. This "dual Type 2" topology is shown in Figure 3. The main problem with this strategy is that it doubles the number of components, thus doubling PSE and PD costs. Additionally, robust design considerations require two DC/DC converters at the PD, one for each component PD, where each DC/DC converter is a relatively complex flyback or forward isolated supply.

One of the DC/DC converters in a dual Type 2 set-up can be eliminated by ORing the PD's output power as shown in Figure 4. This approach still requires two PSEs and two PDs, with the associated cost and space disadvantages. The voltage drop incurred by the power ORing diodes might be considered a fair trade-off for the savings gained by using a single DC/DC converter. In most cases diode ORed power sharing architectures remain attractive until surge protection testing begins. Due to intrinsic reductions in surge protection tolerance, these solutions rarely meet PD design goals.

In contrast, LTPoE++ solutions, as shown in Figure 5, require only a single PSE, PD and DC/DC converter, resulting in significant board space, cost and development time advantages. LLDP Interoperability and Options During selection and architecture of a PoE system, many PD designers are surprised to discover the hidden costs of Link Layer Discovery Protocol (LLDP) implementations. LLDP is the IEEE-mandated PD software-level power negotiation. LLDP requires extensions to standard Ethernet stacks and can represent a significant software development effort. Unfortunately the open-source community effort to provide LLDP support is still in its infancy. While Type 2 PSEs may optionally implement LLDP, fully IEEE-compliant Type 2 PDs must implement both physical classification and LLDP power negotiation capabilities. First, this places the burden of LLDP software development on all Type 2 PDs. In addition, designs are complicated by the dual power requirements inferred by the LLDP requirement. Specifically, the PD-side processor must be fully functional at the 13W power level and then have the ability to negotiate, via LLDP, for the delivery of additional power. Clearly this requirement can increase development and system costs and complexity. LTPoE++ offers LLDP implementation options. LTPoE++ PSEs and PDs autonomously negotiate power level requirements and capabilities at the hardware level while remaining fully compatible with LLDP-based solutions. In short, LTPoE++ gives system designers the choice to implement or not implement LLDP. Proprietary end-to-end systems may choose to forgo LLDP support. This creates time-to-market advantages while further reducing BOM costs, board size and complexity. Power Claims Demystified PoE power paths can be divided into three main components: the power produced by the PSE, the power delivered to the PD and the power delivered to the application. Claims of PSE and PD power delivery capabilities must be carefully examined before useful comparisons can be made. One vendor may describe the power as delivered by the PSE, another the power delivered to the PD, while the PD designer typically cares about power consumed by the application. Although the PSE power metric is the least useful of the three, it is the one most often cited in marketing materials. PSE power is generally defined as the power delivered at the PSE end of the Ethernet cable. Power capability is sometimes further distorted when vendors specify power at the maximum rated voltage, which is rarely achieved. PD power or "delivered power" is the power delivered to the PD end of the Ethernet cable, prior to the diode bridge. Quoted PD power is a more useful metric than PSE power, since it must account for significant losses over 100 meters of CAT-5e cable. PD power claims make no assumptions about the application's DC/DC converter and diode bridge efficiencies, which are unknown to PSE and PD silicon vendors. A PD designer is most interested in the power delivered to the application when all system effects are considered, including the resistance of the Ethernet magnetics, diode bridge voltage drops and DC/DC converter efficiency. This metric, although the most telling, is the most difficult to accurately specify. PSE Availability Linear Technology is committed to LTPoE++ technology and provides an entire family of PSE and PD solutions. A full family of PSEs, spanning 1- to 12-port solutions is now available. Conclusion LTPoE++ offers a robust, end-to-end high power PoE solution with up-front cost savings. Combined with Linear Technology's excellent application support, proven delivery record and reputation for reliability, LTPoE++ is the most comprehensive high power solution on the market. LTPoE++ systems simplify power delivery and allow system designers to concentrate their design efforts on their high value applications. www.linear.com