How much light does the user really want or need? 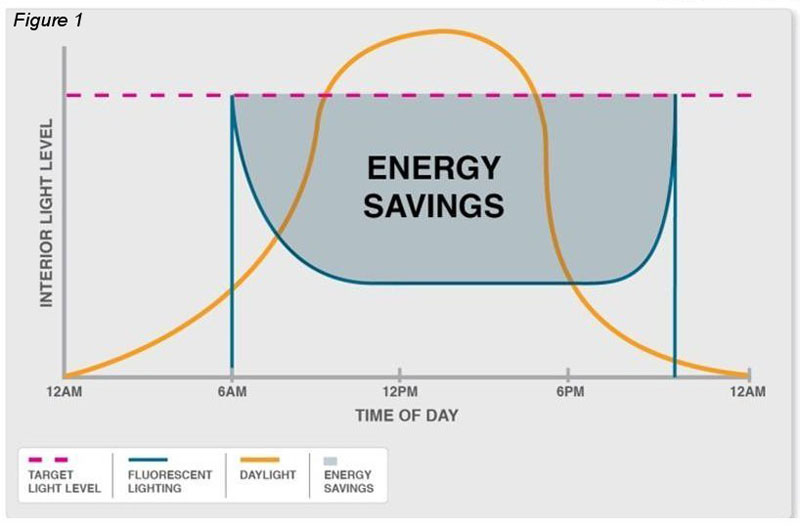 Incumbent lighting installations today fail to address the most important energy saving "feature" a lighting system can implement, namely maintaining a user-defined amount of light that considers the effect other ambient light sources, especially daylight, and provides supplemental light, and only when the space is in use. In the commercial office environment, automated occupancy controls have long-since replaced the simple on/off switch. While an occupancy sensor may have solved part it, the rest of the problem remains unsolved - how much light does the user really want or need? What the user really wants is the light set to a particular level in the space, and then for the luminaires to maintain that constant level as long as the space is occupied. Other than when they are actually setting the desired level, they will not want to see adjustments happening. In a sense, the "dimmer" should not be perceived as controlling the light output (in reality, the power input) for the luminaires it controls, but rather as an overall ambient level controller that sets the brightness of the space. The solution to this type of design comes from Cognitive Lighting™ - lighting systems that are "aware" of the ambient environment and can "learn" the correct adaptations to maintain the user's preferred and productive lighting level in response to changes in the available ambient daylight. What is "daylight harvesting"? While some leading-edge lighting installations have attempted to respond to, or "harvest" daylight across larger spaces, the coming wave of more flexibly controllable luminaires will usher in an era of more granular control, resulting in substantial additional energy savings (Figure 1), as well as enhancing user comfort and productivity. As a result, a Cognitive Lighting™ system design is best addressed at the luminaire or lamp level, rather than attempting to instigate daylight responsiveness at the building level. Daylight-responsive lighting system can be greatly simplified when the sensors and intelligence reside at the luminaire level. In its most basic sense, if you design a luminaire (fixture) or replacement lamp to correctly respond to, and compensate for, the ambient daylight that it senses, the building-level task of lighting management has been simplified by orders of magnitude. 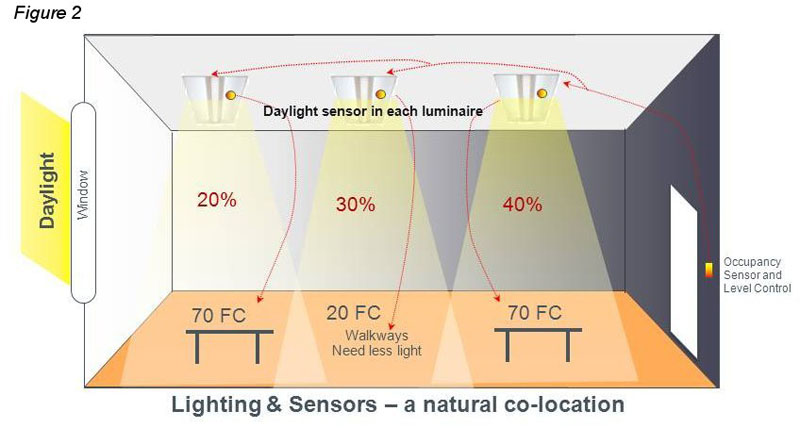 Four basic ingredients are needed to implement a Cognitive Lighting™ design: • Precision ambient light sensors, specifically optimized for daylight harvesting - the "daylight sensor" • A microcontroller-based intelligent lighting controller (ILC) that serves as the light-processing "decision engine" • A dimmable driver or power supply (also referred to as a "ballast" in fluorescent systems) • The light engine - In the past that would have most likely been a fluorescent tube, but with a current luminaire design it is more likely to be an LED based solution in which proper consideration has been given to optical design and thermal management Overview of a sensor-based closed loop daylight-responsive control structure The task of the Cognitive Lighting™ -based space-sensing luminaire is a straightforward one: Start from a user-set ambient light level or "target ambient level setting", and then maintain that target level as illumination from other sources, most especially sunlight, is added or removed from the room. The process of accomplishing that depends upon utilizing a high-quality daylight sensor, that is specifically designed to respond to daylight-driven implementations and which will measure and integrate the lux level that is reflected back at it from the target area. The daylight sensor should perceive the ambient lux value in the same way that the user of the space would, which requires that it operate in a photopic mode, meaning that it assigns a relative value to the photons reflecting back towards it, and thereby accurately approximating the ambient brightness that a human would "see", while additionally rejecting IR (Infra-red) and UV Ultra-violet) wavelengths. It is also important that the daylight sensor only responds to a realistic average lux value, and not to cyclic 60Hz peaks and valleys, such as might be generated by older fixtures in the nearby hallway or other transient sources. Figure 2 is a simplified illustration of space-sensing Cognitive Lighting™ functionality. In this design, each luminaire acts independently to maintain the target illumination level selected by the user. With the Cognitive Lighting™ -based luminaire architecture in Figure 3, the daylight sensor is positioned to allow it a clear field of view of the target space, and is connected to the ILC via an industry-standard serial bus, such as I2C. The ILC serves as the "decision engine", accepting data from the daylight sensor, as well as inputs from the occupancy sensor and illumination level control, typically making use of standard 0-10V control signals or DALI inputs. The ILC then drives an output 0-10V signal or PWM signal to the power control system that has been designed to incorporate 0-10V or other types of dimming controls. 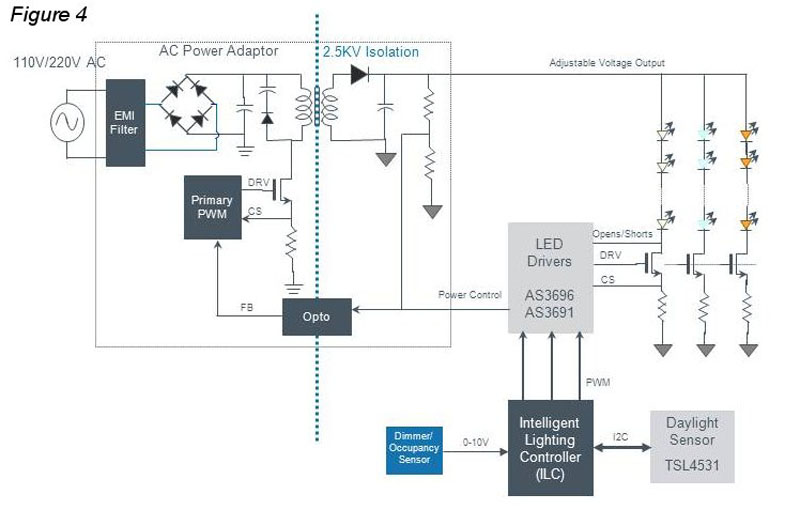 As sunlight enters the room the daylight sensor detects the increase in ambient light in the room, reducing the 0-10V signal proportionally to maintain a constant ambient lux as determined by the user-programed target. The light engine dimming is performed on a non-linear scale optimized to provide smooth dimming that would be a more visually pleasing experience to the human eye, enabled through programmable ramp times and adjustable lux goal targets. Figure 4 illustrates a full lighting solution from AC to lumens in an LED-based luminaire. In this architecture, power is fed from the AC to DC converter, providing the 2.5KV isolation with EMI and power factor correction. The LED driver supports two control loops: 1) The constant current driver loop which maintains a fixed current through the bottom of the LEDs and; 2) The power control loop which maintains the exact output voltage headroom needed on the top of the LEDs by modulating the feedback tap of the AC/DC converter connected to the primary PWM through the opto-coupler. This single-stage conversion delivers the highest power efficiency. The LED drivers should match the current in each string, as well as driver-to-driver, to achieve output and color consistency between strings and luminaires. For commercial quality applications, the strings should be matched to 1% or better. The ILC is constantly monitoring the occupancy sensor, reading information from the dimmer to determine the target illumination set point, and sensing the illumination of the room via the daylight sensor to which it is connected via an I2C port. Each occupancy event resets the "time on" timer, which should be a preset based upon the type of room and other parameters determined by the facility operator. In the on state, the direct lux output from the daylight sensor is continuously compared against the user-set target illumination level, and the light output is dimmed or increased to meet the target ambient lux value. Summary Energy savings continues to be a major driver in building systems design, with daylighting harvesting with occupancy sensing as the path that will maximum this energy savings opportunity. As we've seen, the key to a fully-capable daylight responsive lighting system hinges upon the ability to integrate sensors into the luminaire's individual control system. The lighting market is currently at the inflection point where intelligent lighting is being recognized as both necessary and practical, which suggests that luminaire manufacturers must address those needs by placing designs on the drawing-board now if they want to capture their share of that market. ams