Power management of an artificial hand 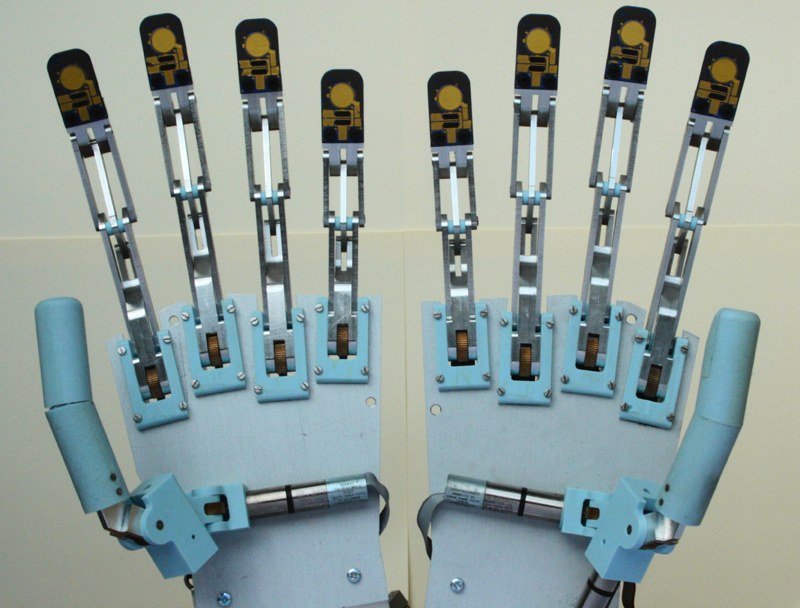 Figure 1: Southampton hands. Across each palm can be seen a dc motor with a worm and wheel to rotate the thumb. Five other motors flex and extend the fingers and thumb. The fingertips have touch (force), slip/texture, and temperature sensors.

For an upper extremity amputee, mass is a main factor when choosing an artificial hand. A hand should be lightweight so that high pressure points do not develop inside the plastic socket that attaches a hand to a person's residual limb. Also, the muscles of the arm and shoulder will have to work harder if a hand is too heavy and a high mass will cause people to reject the technology. A target hand mass is about 350 g. Similarly the power source should be small and have low mass although the source can be attached proximally in a convenient place such as in the socket. In recent years, the advances in battery technology for communications applications have solved the battery problem for the prosthetic hand. As a minimum requirement, one battery pack will be in use with a fully charged spare and another one as a back-up. The typical voltage is around 6 V, for example Lithium-Ion batteries at 7.2 V with a 750 mAh capacity and mass of 65 g. The main demand on the batteries is from the DC motors that move the fingers and thumb. Typically, one motor provides a pinch grip to hold a wide range of everyday objects. A standard H-bridge with MOSFETs controls power to the motor. Movement of the fingers and thumb is achievable at full voltage, producing small torques from the motors to overcome losses and any stretching of the elastic glove that covers the prosthesis. Manoeuvring the fingers and thumb makes only small demands on the batteries. Most of the power is necessary when gripping or squeezing an object. Under this condition, the motors stall and demand maximum current. Heating occurs in the motors and must be limited to preserve the life of the motors. Typical losses in the MOSFETs are small—approximately 2.5% of the instantaneous battery power is lost for a current of 2 A and a resistance, RDS(on), of 0.05 ?. The body diodes that return energy from the motor inductance to the supply have a higher voltage drop: 20% of the instantaneous power may be lost when two diodes are forward biased. However, the motor drive dissipates less power if a MOSFET that is in parallel with the body diode conducts during the time that energy returns to the supply. This operation requires a logical co-ordination of the transistor-switching timing. Similarly, freewheeling current can conduct through a diode or, more efficiently, through a MOSFET. Brushless motors are available specifically for prosthetic use. They provide better mass-to-torque and mass-to-power performance than brushed motors. But, while they reduce mass, they also add to the complexity of electronic operation, requiring rotor-position sensing and additional cables. For example, one three-phase motor requires eight inputs: one power line and one sensor line for each phase with a DC voltage and return zero. Ideally, an electronic circuit would mount close to the motor or integrate at the end of the motor casing so that only two DC supply cables stretch from the actuator to the battery and one signal control line from an electronic controller. Electronics circuits are required to control the H-bridges. Standard pulse-width-modulation varies the DC voltage a microcontroller applies to the motor terminals. Also, electronics are necessary to detect the small voltages from a muscle or two that are used as control inputs from the wearer of the artificial hand. The user inputs are from myoelectric signals that have a random and spiky nature so they are rectified and smoothed to produce analogue or digital signals. Three small electrodes placed on the skin surface above a muscle connect to a low-power instrumentation amplifier that feeds into the microcontroller. The system employs an interface between the controller circuits and H-bridges when the controller operates at a voltage lower than that of the battery (e.g. 3 V). In such cases, a small DC-DC converter steps down the battery voltage. Historically the development of artificial limbs has progressed during and after international conflicts. Recent events have resulted in further developments of hands with more than one motor to move the fingers individually rather than as a group. With this vision comes a demand for more power from the batteries and additional mass. However rather than relying on only one motor to produce torque, the system can distribute power with additional motors, forming a more efficient grip. The thumb is a dominant feature of any design and so as a compromise, the system could drive the fingers as a group with one motor while operating the thumb with two motors to allow for rotation and, hence, positioning as well as grip. With the need to co-ordinate multiple actuators and to make an artificial hand user-friendly, sensors are added to the design (Figure 1). Sensors can free the user from low-level control in much the same way that spinal reflexes and pattern generators automatically co-ordinate natural movement. The sensors measure finger position, force, slip/texture, and temperature. Adding more devices increases power demand so sensors and any subsequent signal processing needs to be minimised. Adding complexity to a prosthetic limb requires more components that consume more power. However, developments in sensors, motor performance, battery technology, and actuation help to lower the mass and increase function. All the electronics and power management circuits can mount on a single board and occupy a plastic box attached to the plastic socket connecting the artificial hand to the person's residual stump. An industry standard plug and socket (wrist) has electrical connectors to interface the electronics to a hand allowing for easy attachment or detachment of an artificial hand. Circuit boards may be circular and can make use of spaces inside the socket just before the interface or just inside a hand after the plug and socket connection. The management of power is an area that perhaps has not received the attention that it deserves and with future hand design, there is a need to consider this aspect in the context of the whole system design. University of Southampton