Safety of Household and Similar Electrical Appliances – How EN 60335 Compares

When designing to meet the requirements of EN 60335, engineers have to adopt a different mind-set. Compared with the familiar IT and medical standards, not only are some design limits different but also the potential users and end products are much more varied. Unusually in safety evaluation, multiple faults have to be considered simultaneously with the effects of EMI.

The scope of the standard

EN 60335 part 1 is a safety standard for household and similar electrical appliances that defines how these categories of products can meet the overall requirements of the ‘Low Voltage Directive’ LVD 2006/95/EC and others such as the ‘Machinery Directive’ 2006/42/EC or even the ‘Construction Products Directive’ 89/106/EEC, as relevant. This variety is in recognition of the fact that a typical household will have all sorts of electrical equipment, intended for many different uses. Because the products can vary in type and use so much, unusually, EN 60335 includes currently 114 ‘Part 2’ standards which relate to the requirements of particular products ranging from toys to insect killers to ‘scissor type’ garden shears. For this reason, the relevant ‘Part 2’ document also has to be consulted and takes precedence over the ‘general requirements’ of Part 1. Standard EN 60664-1, ‘Insulation coordination for equipment within low-voltage systems. Principles, requirements and tests’ is also often referenced.

A modern kitchen might have ‘professional’ grade appliances which are covered by the standard. Equally, commercial premises can also have equipment intended for the domestic market; examples would be hotels, shops, offices and anywhere with a ‘house-keeping’ function such as care homes. The standard covers these areas as well, with the increasingly blurred distinction between office, home and medical. Even outdoor equipment such as electric fence controllers are covered.

Another layer of applicability is the expected user. EN 60335 covers equipment handled and operated by the general public but specifically excludes provisions for very young children up to three years, young children three to eight years without supervision and very vulnerable people with extensive and complex disabilities. Generally, EN 60335 covers rated input voltage not more than 250 VAC single-phase and 480 VAC 3-phase as well as battery operated equipment but some specific household products such as power tools are covered by their own separate standards. The standard specifically does not apply to audio, video and similar electronic apparatus, appliances for medical purposes, hand-held motor-operated electric tools, personal computers and similar equipment or transportable motor-operated electric tools.

EN 60950, EN 60065 and their successor EN 62368 have been common standards applied to Information Technology and audio-visual equipment. EN 60601 is the equivalent for medical. Power products meeting these standards would not necessarily meet the requirements of EN 60335 although in some areas EN 60335 is less stringent.

Examples are that EN 60950 allows solid insulation of >0.4 mm for reinforced insulation to accessible parts with little conditionality but EN 60335 defaults to >2 mm unless specific evaluation of the material is done along with 48 hr dry heat tests and subsequent high voltage dielectric tests. Even after that, the standard still requires > 0.6 mm for equipment subject to over-voltage class II environments and >1.2 mm for class III. Another example difference is creepage and clearance; EN 60335 refers to IEC 60664 when the working voltage across isolation has periodic waveforms imposed greater than 30 kHz as would normally be the case with switched-mode power supplies. The IT standard EN 60950 and medical IEC 60601 are less prescriptive on this, just using ‘actual rms or dc’ whereas the newer standard EN 62368 also refers to IEC 60664. The difference this makes in creepage distances is a minimum overriding value as shown in the graph for a pollution degree (PD) 1 environment for any level of isolation basic/reinforced. The values are multiplied by 1.2 and 1.4 for pollution degrees 2 and 3 respectively. 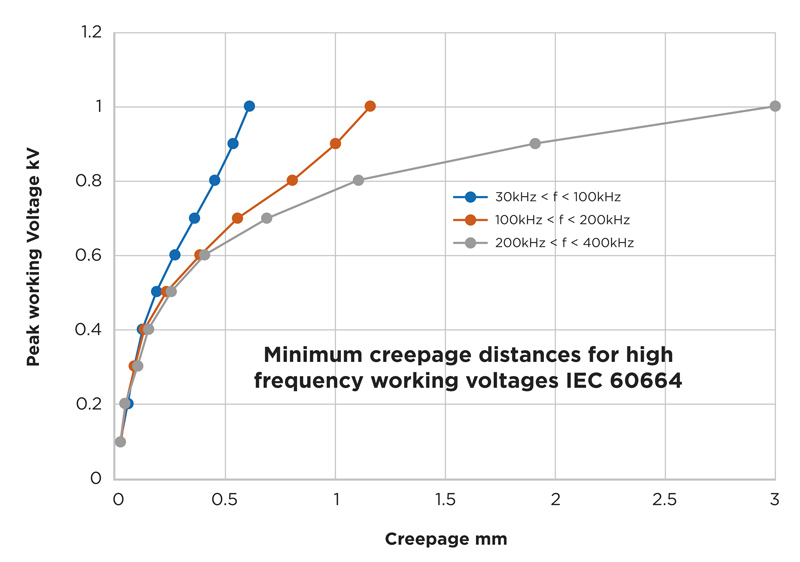 Figure 1: Creepage distances depend on frequency, not just voltage

In practice, the minimums only override the EN 60335 default values for higher frequencies and voltages. For example, EN 60335 requires 2.4 mm PD1 at 1 kV working voltage, basic insulation. In this case above 200 kHz, the high frequency peak value for creepage of 3 mm applies.

Otherwise, EN 60335 is less stringent in some areas. For example, compared with EN 60950, the ‘basic’ level hi-pot test is 1250 Vrms compared with 1500 Vrms, clearances distances are a little less and the ground impedance test current is 25 A rather than 32 A.  SELV for EN 60335 is however lower at 50V with no load compared with 60 V for the IT standard. EN 62368, the replacement for EN 60950 does away with the concept anyway and refers to Energy Source (ES) limits where the maximum voltage deemed safe depends on prospective current and frequency.

In the latest edition, the writers of EN 60335-1 standard have come right up to date with the realities of modern household equipment. It is likely to be ‘smart’ and have electronic controls and may even be Internet connected. The electronics may now be part of the inherent safety provisions of the equipment, for example many ON/OFF controls are now digital inputs to a processor putting the product into a ‘standby’ mode. If the electronics is monitoring temperature and relies on that ON/OFF control to disconnect the device, the electronics is certainly part of safety. In a break from history, the standard therefore considers failures in the electronics in conjunction with another single fault elsewhere, effectively two faults.

The electronics fault could simply be that a coin cell battery keeping a processor alive during power drop-outs is not replaced routinely – something we are probably all guilty of. To test for this, the standard requires equipment with Protective Electronics Circuits (PECs) to be subject to a slowly reducing input voltage to the level where functionality is lost but with any back-up battery disconnected. The product has to remain safe. Other hard faults in the PEC are imposed along with a ‘first’ fault such as bridging of basic insulation, again checking for no hazard. As can be imagined, the combination of possible faults multiplies up requiring careful engineering judgement as to what to test.

This contrasts with the IT and medical safety standards which look for safe operation only after imposed single faults.

Equipment meeting IT and medical standards for example have to meet the provisions of the EMC directive 2014/30/EU which mandates compliance with the appropriate standard defining EMI and its severity in the EN 61000-4 series. The product is categorised as to whether it continues to function, interrupts or fails. However, failing in a way that compromises other safety protection features in the equipment is not evaluated. In EN 60335 this is considered, again in recognition of the fact that the environment is not well controlled and equipment may not be routinely maintained. Consequently, a failure is imposed in any PEC and then the EMC tests conducted to check for safety hazards.

The severity levels of EMI according to EN 61000 are typically set high (see table 1) and significantly, surge arrestors on mains power supply inputs are disconnected during the tests. The rationale for this is that these components can have wear-out mechanisms and cannot be assumed to be effective after periods in service.  We now have three ‘abnormal’ conditions, a failed PEC, a worn-out surge arrestor and an EMI surge or transient.

Integral power supply products therefore have to be designed to withstand these stress levels without surge arrestors and not fail or induce failures in a hazardous way. They must also not respond to the EMI stimulus and PEC failure by switching into an operating condition from a safe standby or off condition set by the first PEC failure.

A specific requirement in household equipment meeting EN 60335 is that any software or firmware control of the product should be robust under single fault conditions and with EMI applied. The software should not have any systematic ‘bugs’ and be subject to a program of verification and validation in development to ensure that safety is not compromised. The hardware comprising the program electronics needs to be evaluated with Failure Mode and Effect Analysis (FMEA). All this with an existing first fault and EMI and at any identified critical point in the program execution.

For comprehensive protection, redundant hardware may need to be added or effective self-test and reporting schemes.

The latest technology in power supply products will often include digital processing and control with field updatable firmware. This of course is affected as well.

EN 60335 is certainly addressing the reality of modern household equipment – perhaps future editions will need to address safety implication of their wireless connectivity as well. 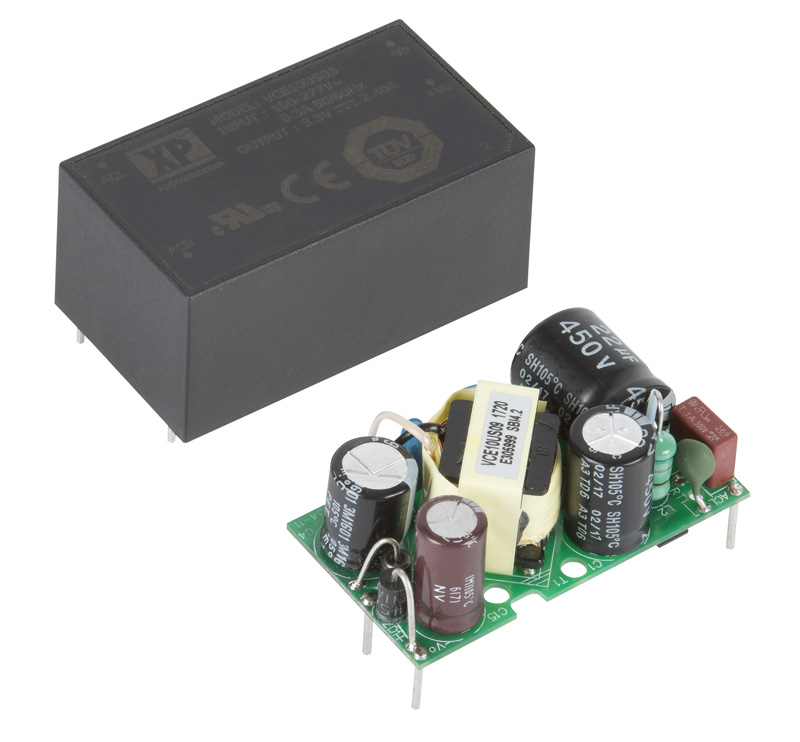 Working with a power designer and manufacturer, experienced in integrating power products into EN 60335 applications eases the end equipment EMC and safety approvals processes benefitting time to market and costs for new domestic appliances. XP’s products are being successfully used in heating applications, pumps, hand dryers, heat exchangers and many other products requiring EN 60335 approvals with power ratings ranging from three to hundreds of Watts.