Traditionally devices were connected by wires to their power sources

The “Internet of Things” (IoT), refers to a growing trend to connect not only people and computers, but all sorts of “things” to the Internet, and therefore, each other. By way of example, consider if you will applications such as industrial plants or large infrastructure projects where connecting more sensors (or actuators) in more places can increase efficiency, improve safety, and enable entirely new business models.

Traditionally wires connected devices and sensors to their power sources. Now, rather than the challenge and expense of running cables all around a facility, it is now possible to install reliable, industrial-strength wireless sensors that can operate for years on a small battery, or even harvest energy from sources such as light, vibration or temperature gradients. Furthermore, it is also possible to use a combination of a rechargeable battery and multiple ambient energy sources too. Moreover, due to intrinsic safety concerns, some rechargeable batteries cannot be charged by wires but require being charged via wireless power transfer techniques.

State-of-the-art and off-the-shelf energy harvesting (EH) technologies, for example in vibration energy harvesting and indoor photovoltaic cells, yield power levels on the order of milliwatts under typical operating conditions. While such power levels may appear restrictive, the operation of harvesting elements over a number of years can mean that the technologies are broadly comparable to long-life primary batteries, both in terms of energy provision and the cost per energy unit provided. Moreover, systems incorporating energy harvesting will typically be capable of recharging after depletion, something that systems powered by primary batteries cannot do.

Nevertheless, most implementations will use an ambient energy source as the primary power source, but will supplement it with a battery that can be switched in if the ambient energy source goes away or is disrupted. This battery can be either be rechargeable or not and this choice is usually driven by the end application itself. So it follows that if the end deployment allows for easy access to change a non-rechargeable battery, where maintenance personnel can readily swap it out in a cost effective manner, then this makes economic sense. However, if changing the battery is cumbersome and expensive, then the utilization of a rechargeable battery makes more economic sense. Even if a rechargeable battery is selected, the question of the optimum method to charge it remains open.

Some of the factors that will affect this decision are:

1) Is there a wired power source to charge the battery?

3) Is wireless power transfer required to charge the battery due to intrinsic safety requirements due to the hazardous nature of its deployment?

Fortunately for the designer of such challenging systems, there exist a number of power ICs which have the necessary features and performance characteristics to enable such low levels of harvested power to be used in wearable technology applications. Linear Technology recently introduced two parts for this purpose, the LTC3331 and the LTC4120. The first is the LTC3331, an energy harvesting and battery life extended as illustrated in Figure 1. 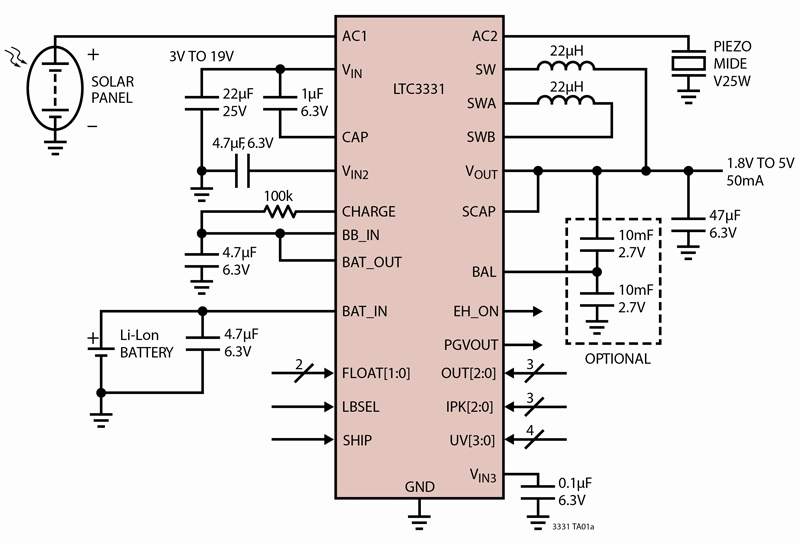 The LTC3331 is a complete regulating EH solution that delivers up to 50mA of continuous output current to extend battery life when harvestable energy is available. It consumes no supply current from the battery when providing regulated power to the load from harvested energy and only 950nA when powered from the battery under no-load conditions. The LTC3331 integrates a high voltage EH power supply, plus a synchronous buck-boost DC/DC converter powered from a rechargeable battery to create a single non-interruptible output for energy harvesting applications such as those in WSNs.

The LTC3331’s EH power supply, consisting of a full-wave bridge rectifier accommodating AC or DC inputs and a high efficiency synchronous buck converter, harvests energy from piezoelectric (AC), solar (DC) or magnetic (AC) sources. A 10mA shunt allows simple charging of the battery with harvested energy while a low-battery disconnect function protects the battery from deep discharge. The rechargeable battery powers a synchronous buck-boost converter that operates from 1.8V to 5.5V at its input and is used when harvested energy is not available to regulate the output whether the input is above, below or equal to the output.

The LTC3331 battery charger has a very important power management feature that cannot be overlooked when dealing with micro-power sources.  The LTC3331 incorporates logical control of the battery charger such that it will only charge the battery when the energy harvested supply has excess energy.  Without this logical function, the energy-harvested source would get stuck at startup at some non-optimal operating point and not be able to power the intended application through its startup.

The LTC3331 automatically transitions to the battery when the harvesting source is no longer available. This has the added benefit of allowing the battery operated WSN to extend its operating life from 10 years to over 20 years if a suitable EH power source is available at least half of the time, and even longer if the EH source is more prevalent. A supercapacitor balancer is also integrated allowing for increased output storage. In addition to the ever-increasing energy harvesting options, the IoT also benefits from improved wireless charging techniques because wireless charging makes charging batteries possible where physical contact is not practical.

The second IC recently introduced for these applications is the LTC4120, a wireless power receiver and battery charger, that also integrates technology patented from PowerbyProxi (a Linear technology partner). PowerbyProxi’s patented Dynamic Harmonization Control (DHC), technique enables high efficiency contactless charging without thermal or electrical overstress concerns in the receiver. Using this technology, up to 2W can be transmitted at a distance of up to 1.0cm. However, for single-cell Li-Ion batteries, the maximum charge voltage of 4.2V and maximum charge current of 400mA will limit this value to 1.7W. Similarly, the 2W maximum will limit 2 Series Li-ion batteries (8.4V maximum charge voltage) to 240mA of charge current. 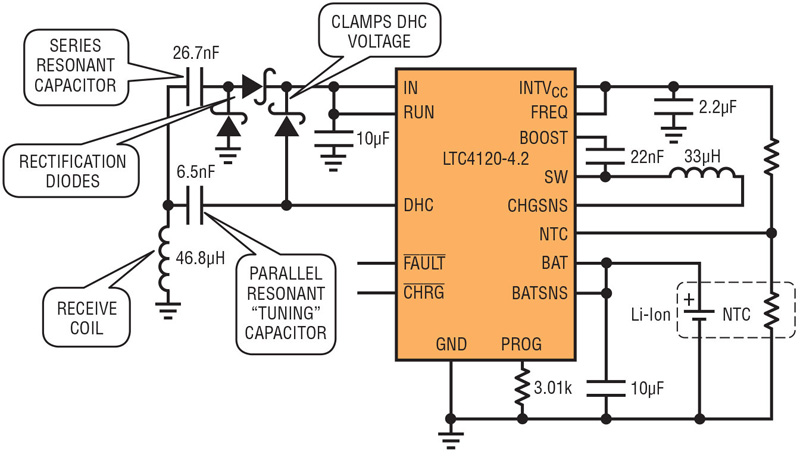 The metrics of power, efficiency, range and size determine system performance, and so the LTC4120-based wireless power system was designed to receive up to 2W at the battery up to a distance of 1.0cm when used with one of several transmitter options. Efficiency calculations vary tremendously based on the technique and components used. Typically, the battery will receive 45% – 55% of the DC input power fed to the transmitter in an LTC4120-based system.

It is clear that DHC solves a problem fundamental to all wireless power systems. Every system must be designed to receive a certain amount of power at a given maximum transmit distance. Every system must also be designed to survive a no-load condition at minimum transmit distance. The competitive alternatives solve this problem with a complicated digital communication system that adds complexity and cost, limiting power transmission distance. The LTC4120-based wireless power system solves this problem by incorporating PowerbyProxi’s DHC technology.

Even though industrial WSN applications with energy harvesting systems will have a broad range of power levels, microwatts to greater than one Watt, there are readily available power conversion ICs for the system designer.

Fortunately, the LTC3331 energy harvester and battery life extender, along with the LTC4120 wireless battery charger, provide the necessary feature set for a broad range of low to medium power applications enabling an exploding category called the Internet of Things.