Comparing the operating mechanisms of the key relevant standards 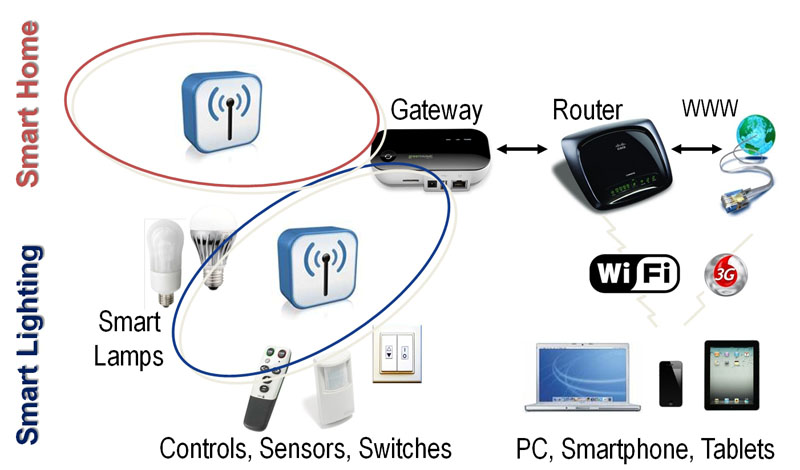 JenNet-IP In many respects, the operation of JenNet-IP is very similar. The major difference is that JenNet-IP uses Internet Protocol (v6) packets throughout the entire system. This means that every device on the network has it's own IPv6 address and can, in principle, be directly controlled from anywhere on the Internet. In order to realize this capability, JenNet-IP uses a number of protocols from the Internet Engineering Task Force (IETF). These are standardized worldwide and are highly familiar to the engineering community. The network stack architecture is described in Figure 2 below. JenNet-IP uses the same IEEE802.15.4 MAC and PHY layers as ZigBee. The networking layer uses a robust tree network layer known as JenNet. In order to maintain the robustness of the system, this layer includes a self repair mechanism. If an individual routing node breaks or loses power, any nodes below it in the tree will try and rejoin the network, restoring communications. The 6LoWPAN layer implements an IETF standard for enabling IPv6 packets to fit into the maximum 128 bytes length of the IEEE802.15.4 standard. It does this in two ways; firstly by providing a means to fragment any long packets into a number of segments which can be sent individually across the network and reassembled at the destination and secondly by providing compression of the IP addresses. Standard IP and UDP provide the transport layers such that the wireless system looks like a normal UDP interface to the outside world. One of the benefits of this approach is that an IP packet destined for a particular IP address will always make its way there without the need for translation into a different format. Provided the end device knows how to interpret the packet, it will result in the desired action. What is missing from this picture so far is the application layer; the mechanism that defines exactly how a device will behave when it receives a packet. The IETF have defined a structure called Simple Network Management Protocol (SNMP) but this is too unwieldy for use on simple devices with limited resources. JenNet-IP takes the same basic principle of SNMP and adapts it for use with low power wireless nodes. The basic approach is to use a technique known as Management Information Base (MIB). This defines device characteristics in a number of small database entries, which can then be interrogated or modified using simple self-explanatory commands like "SET" and "GET". This is a powerful technique that allows complex behaviors to be built up for any type of device. Examples for a lamp will include "ON/OFF", "DIM LEVEL", "GROUP MEMBERSHIP" etc. Using this approach, it is possible for a remote internet connected controller such as a Smartphone to send the relevant "SET" commands directly to a lamp. Devices within the network such as remote controls or light switches can also be added to provide local control. Groups and scenes also have addresses assigned to them in the same way as individual lamps. Lamps know which groups they are members of and the characteristics to set up in scenes and simply respond to those addresses as well as their own individual ones. In this way, JenNet-IP can set up similar lighting control functions to ZigBee LightLink, and indeed, can be easily expanded to cover the wider home automation or building automation functionality using the same basic approach. To summarize, Smart Lighting is a reality right now with the advent of low cost silicon, long life LED lamps and smart controllers in the form of smart phones. There has been a huge amount of effort invested in the development of new wireless standards such as ZigBee LightLink and JenNet-IP that will allow consumers to experience new control functionality and reduced energy bills. With these capabilities in place, the future of Smart Lighting is starting right now. NXP Semiconductor